Shax (pronounced as Shahh) is two player board game that has been played in the Horn of Africa for centuries. It holds a special cultural place in Somaliland, where it has been a popular pastime, particularly amongst nomadic people, for generations. Although similar to its European cousins, Nine Men’s Morris and Filetto, it has evolved into a highly sophisticated board game, and structured rules, that long ago was adopted as a means of bringing together people of different groups to help resolve issues of the day. As such, Shax is the subject of much Somali literature, featuring in many poems and sayings, in recognition of it ubiquitous place in Somali cultural and social history.

Shax and computer: Software to play Shax against the computer was released few years back and is being used by many people. It runs on Windows, and can be downloaded by the redsea-online.com website: Download: RedseaOnline.Com 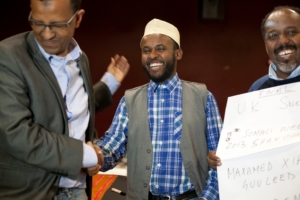